A semi-dynamic fountain created by the Venetian company Forme d’Acqua as the centerpiece of the reconstruction of the historic center of Concordia sulla Secchia, where the new square dedicated to the Italian partisan and politician Gina Borellini was inaugurated on Saturday 29 May.

Saturday 29 May Forme d’Acqua Venice Fountains, the Cavallino Treporti (VE) company specialized in the design and construction of custom fountains, is in Concordia sulla Secchia (MO) for the inauguration of the new square named after Gina Borellini, partisan and Italian politics, gold medal for military valor and a leading figure in local and national political life and in the struggles for the affirmation of equal rights between women and men after the war.

The heart of the square beats to the rhythm of the ten water jets of the semi-dynamic floor fountain, whose technical design and construction bear the signature of Forme d’Acqua. The fountain is the focal point of the intervention: it extends over a rectangular area of ​​almost thirty square meters covered in flamed Luserna stone, where two parallel rows of five jets each contrast and dialogue with the surrounding architecture, creating a scenographic curtain of ‘water. The skeleton of the fountain consists of ten custom-made AISI 316 steel boxes, recessed flush with the floor and connected to each other, where the pumps, nozzles and spotled lights dedicated to the lighting of the water features are housed. The water used is always the same, filtered, automatically balanced in the levels of acid and chlorine and put back into circulation: all this is possible thanks to an innovative filtration system and a control unit with double dosing pump for the automatic dosage of acid and liquid chlorine.

To emphasize the movements of the fountain in the evening and give an ever-new touch of color to the building that embraces the new square, an RGB-W LED spot has been installed near each nozzle that illuminates the water jet and amplifies it. reflexes and movements.

The inauguration falls precisely nine years after the earthquake that hit Emilia Romagna and the Municipality of Concordia sulla Secchia hard, leaving heaps of rubble along the streets. In recent years, the interventions aimed at rebuilding the territory have been many, among which the program “Regeneration and revitalization of the historic centers hit by the earthquake” stands out, for which in 2015 the Municipality obtained a regional funding of € 1,250,000, part of which destined for the construction of the new piazza Gina Borellini, symbol of a new beginning that does not want to forget the past and traditions. For the design of the new square, the Municipality of Concordia sulla Secchia opened a tender which was won by the KM 429 Architettura studio in Viadana (MN). Arch. Alessio Bernardelli (project leader) has worked to recreate a new centrality, a hinge between past, present and future by transforming Viale Garibaldi, from street to square, the hub of new activities for a renewed sense of attractiveness. The construction part was overseen by the Merighi srl company of Cento (FE), which turned to Forme d’Acqua Venice Fountains for the MEP (mechanical, electrical and plumbing) design and the creation of water games.

“The fountain has always played a prestigious role in urban architecture – says Gianluca Orazio, CEO of Forme d’Acqua – but above all it is a place dedicated to the social life of the city. Over time its “practical” role has waned, however amplifying its symbolic and artistic value. Nowadays, the fountain is an increasingly present element in urban redevelopment and regeneration projects, thanks to its communicative potential and its ability to increase the sense of well-being given by design. In this project, water is used to clean the historic center from the rubble of the earthquake to restore a corner of the city that is an example for the new generations.”

In the pavement of the square there is a slab with a sentence by Hon. Gina Borellini addressed to young people, pronounced in the nineties but still relevant today to urge them to be protagonists of their life and their time in a democratic way: “I would like to tell young people that the thing to avoid is the use of weapons, and that they their youth to a democratic commitment to peace against war.”

The inaugural ceremony was introduced by the Mayor of Concordia sulla Secchia Luca Prandini, attended by the President of the Emilia-Romagna Region Stefano Bonaccini and the relatives of Gian Borellini; furthermore, the managers and presidents of ANPI, ANMIG and UDI, associations for which Gina Borellini worked for her, and of the Women’s Documentation Center of Modena contributed. During the event, the Giustino Diazzi Philharmonic and the La Zattera theater group entertained the participants with music and readings.

Forme d’Acqua designs, builds and markets fountains, for indoor and outdoor, in Italy and abroad.

He works with the best professionals to always create something new, combining water with the finest materials, and using craftsmanship techniques together with the most modern mechanical and technological systems. His goal is not to focus on the product, but on the experience lived by the observer. This is why he plays with materials, sounds and lights in a synergistic way, so that the result is not a simple fountain, but a unique piece of furniture. 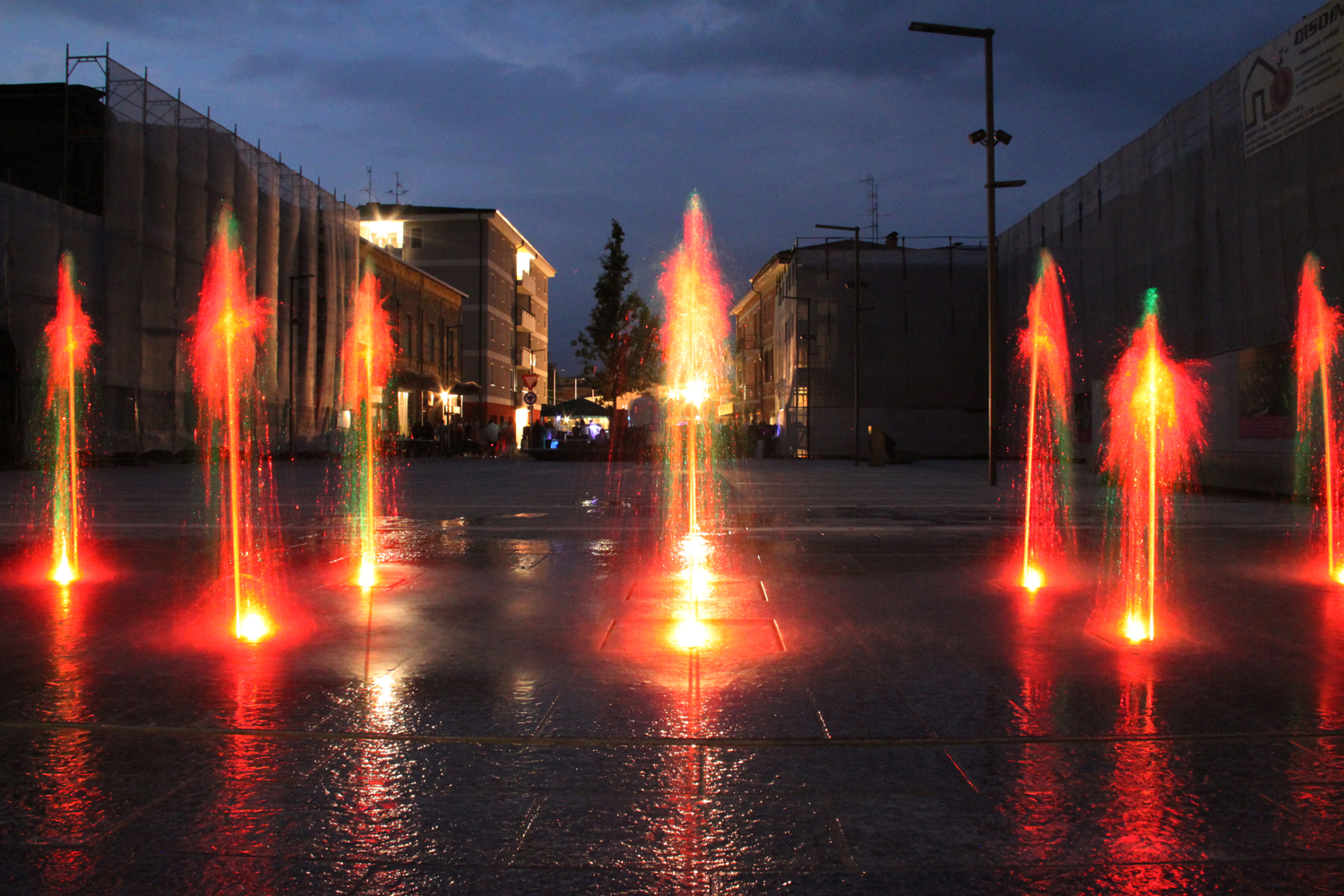 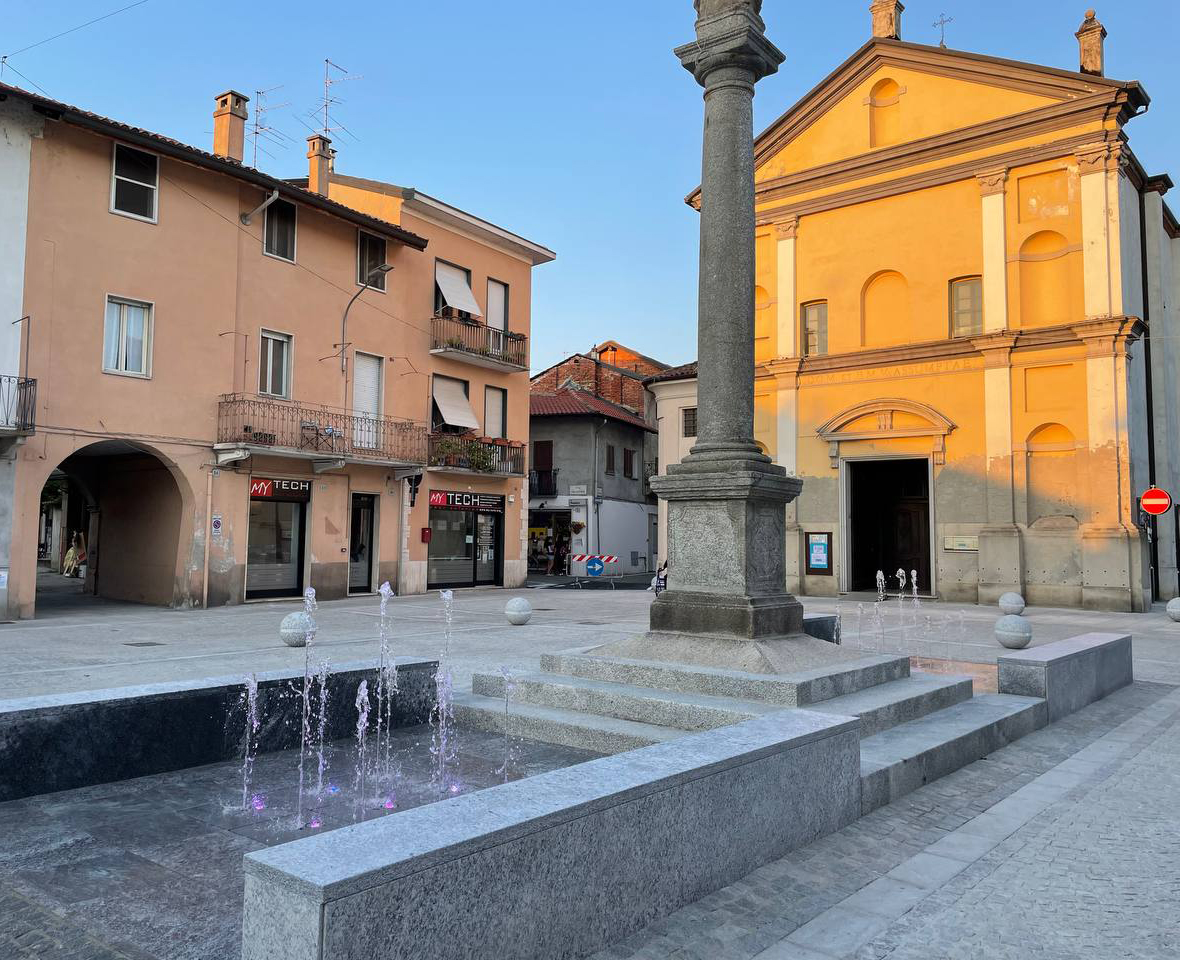 Cavallino-Treporti, May 29th 2021    A tailor-made water feature for the new Gina Borellini square in Concordia sulla A semi-dynamic fountain created by the Venetian company Forme d’Acqua as the