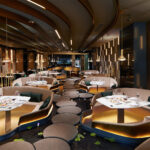 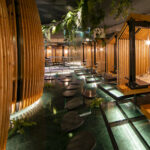 Indoor fountains – Sushizero Restaurant, San Martino Siccomario (PV)
Outdoor
Water game – Papadopoli Hotel, Venice
Conservative renovation of the marble fountain of Papadopoli Gardens in Venice
0 Comments
0 Like!
Share
Description
Arriving from the mainland, the gateway to the historic center of Venice opens towards one of the few public parks in the city: Papadopoli Gardens. Designed in the 1834-35 by the scenographer ot the Fenice Theater Francesco Bagnara, where the monastery and the church of Santa Croce previously stood, which gave the name to the namesake district. These gardens, in full Romanesque style, extended over 12.000 square meters between paths and flowerbeds, of which today only 7,500 square meters remained to make room for the Piazzale Roma terminal. In the last years there were object of important and careful restoration works, which brought to the renovation and the requalification of the area, fully sponsored by Olivier Pelat, the owner of the nearby Hotel Papadopoli ****, who wanted to relaunch and take care of a “important green lung in a city essentially of stone”. The restoration was entirely designed by the architect Luciano Parenti of Studio Parenti, who also supervised the construction supervision; the construction company in charge for the construction of the executive part was Costruzioni e Restauri G. Salmistrari s.r.l., a reference company for the monumental and architectural restoration of historic buildings. The architect Parenti entrusted Forme d’Acqua Venice Fountains with the MEP design and restyling of the fountain, which has long been in disuse and missing some elements, such as the central basin that collected the water from the nozzle. Following the restoration, the fountain looks like a large circular marble basin, 60 cm deep, with a column in the center, from which a jet of water comes out, at the base of which there are decorative stones. The stone curb in the external part of the tub and the basin placed at the top of the column have been restored, which collects the water from the nozzle that overflows along the edge, generating a suggestive drop effect, to fall into the large basin below where the nature that surrounds it is reflected. The fountain is equipped with a filtration system made by a pump pompa Fluidra Astralpool Sena 1/2HP 0,35KW 220V 7800l/h and an Aster Sand Filter. A double dosing pump Fluidra Astralpool Exactus automatically adjust chlorination and acidification, while the water level is kept stable by an OASE WLS 20-4 level sensor with 1 "FF solenoid valve and Lovato control unit. The control panel automatically manages the fountain's water play, filtration and automatic loading with stop for dry motors. Thanks to these systems wtare is always clear and continually reuse and reinstated as needed, ensuring durability over time and sustainable management of water resources. The shapes of the fountain are emphasized with the setting of the sun, when the five Teclumen MINI SUB RGBW 120 ° LED spots in 12V 15W IP68 in AISI316L steel are turned on, whose RGBW LED color changing system with conveyed waves allows you to choose thirteen colors fixed and ten pre-set sequences, selectable from the control unit or remote control. With this renovation project has been returned to the city an important zone of the historic centre, which before the start of the works was in a state of neglect: the fountain has been restored, all the statues on the walls of the park have been restored to their original splendour, including the main one of Pietro Paleocapa, as has the entire street furniture, gates and lead ribbons. Olivier Pelat, passionate and connoisseur of green nature, also wanted the plant heritage to be redesigned, so the unsafe trees were removed and replaced, new ornamental plants inserted and an irrigation system created. Now the Papadopoli Gardens welcome citizens and visitors in search of a green corner and instil well-being through their wealth of natural elements and the art they contain.
Materiale