From the masterplan by Zaha Hadid Architect, a staircase where water unites and accentuates the fluidity of forms, enhancing their smoothness
Home » Portfolios » Artistic Fountains » Regium Waterfront – Reggio Calabria 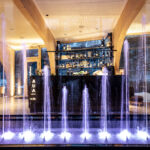 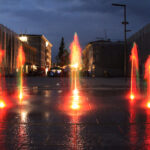 Floor fountain – New Piazza Gina Borellini, Concordia sulla Secchia (MO)
Artistic Fountains
Regium Waterfront – Reggio Calabria
From the masterplan by Zaha Hadid Architect, a staircase where water unites and accentuates the fluidity of forms, enhancing their smoothness
0 Comments
0 Like!
Share
Description
Her style is defines as parametric, a layered organization of the spaces that creates a series of interconnected floors. An architecture, fragmented, decomposed, devoid of orthogonal elements that can interrupt that infinite flow fluidity of her works. Zaha Hadid was not only one of the leading exponents of deconstructivist architecture, but her disruptive creativity led her to be the first woman to win the Pritker Prize in 2004. Since 2016, Zaha Hadid Architect (based in Clerkenwell - London, founded in 1980) has been carrying on her artistic legacy by creating masterplans with an unmistakable design, continuing as if she were still present and keeping her image alive in the works they design. Reggio Calabria has recently inaugurated part of the Regium Waterfront project, located north of "the most beautiful kilometer in Italy" - the Falcomatà seafront - redeveloping and regenerating the entire Waterfront area of the city center, elevating it to a new pole of social aggregation. The concept is inspired by the shape of the starfish for its symmetry and for the proverbial ability to regenerate: just as the starfish has the ability to self-regenerate an arm, Reggio Calabria through architecture regenerates well-being and beauty in a degraded urban area. This project saw the creation of a new aggregation system in the area in front of the former parking area of the Rotonda Nervi with the creation of a lower square and an upper square (in the Pineta Zerbi area), connected by a access stairway, to and from the city, accompanied by a descent of water. The water element is not new in the design of Zara Hadid Architects: the metaphor of water in motion was already present in the masterplan for the Roca London Gallery, imagining a gallery eroded by the waves of the sea. In the Regium Waterfront, it will be the strategic position of the city overlooking the Strait of Messina or the influence of the seas that bathe Italy on three sides, but the water element is strongly perceived in the unstable and asymmetrical fluidity of the shapes reflected in the long fountain adjacent to the staircase. The water of the fountain descends harmoniously along three steps alternating with as many pools, which absorb its dynamism and highlight the freedom of the forms generated by its flow. Forme d’Acqua Venice Fountains oversaw the MEP design and construction of the fountain, setting up a water filtration and recirculation system to ensure durability of the work and sustainable use of water resources. The filtration system is given by an Astrapool Pump Sena 1 / 2HP 0,37KW 220V 7800l / h with Astrapool Aster Sand Filter 350 grit filter connected to an Astrapool panel with double dosing pump for acidification and automatic chlorination of water with probe control, automatic replenishment in the tank and an acid level sensor. Instead, the water handling system is given by three Astrapool Pump Victoria Plus Silent 1CV 076Kw 220V IP55 16000l / h pumps with tailor-made linear pre-filtration in perforated sheet along the entire width. The bottom vents in AISI316 stainless steel distribute the water flow. The unmistakable stylistic feature of Zaha Hadid Architects' projects is the use of smooth white resin-coated concrete that allows the creation of architectures as if they were real sculptures: pure, straightforward surfaces that free the imagination of shapes on structures that are free from traditional aesthetic standards. In the combination of the concrete material and the water element, the lighting becomes a spectacle by projecting unique colors on the surrounding building through RGB + White 3000 ° IP68 resin-coated opaque white LED bars. To complete the design of the fountain, an automatic loading system with stop for dry motors (given by an OASE 20-4 level sensor and a 1 1/2 "FF solenoid valve) and an OASE Overflow / Drain bronze overflow armature 70/1000 - to guarantee a constant water level - and a bilge pump for the automatic emptying of the technical compartment Finally, a control panel allows the automatic management of the fountain, filtration and automatic loading. The realization of this project required the intervention of highly specialized organizations, design studios and international companies: the Municipality of Reggio Calabria has awarded Artuso Architetti Associati the final and executive design of the masterplan, coordinated by the architect Filippo Innocenti of Zaha Hadid Architects, Project Director of the Regium Waterfront project. Cobar SpA, the company in charge of the construction and coordination of the works, has entrusted Forme d’Acqua with the executive design and construction of the artistic fountain. Overall, this project has drawn an aura to the city of Reggio Calabria, which, in addition to boasting a three-thousand-year history and priceless works of art, now illuminates Italy with this small real world suspended between fantasy and the infinite. Who knows if the young Nando Martellini imagined that "the most beautiful kilometer in Italy" (as it was defined by him in 1955) would be the subject of the intervention of the irrepressible creativity of Zaha Hadid Architects, but we are sure that he would share with us that this intervention has made this enchanting Waterfront even more fascinating.