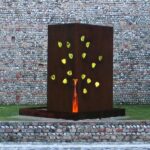 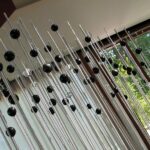 Crystal in the air bubbles
Artistic Fountains
Milano Water Design 2016
Installation Castello Sforzesco
0 Comments
0 Like!
Share
Description
Milan, Sforza Castle, Ducal Courtyard. One of the most fascinating and charming place in Milan, hosted the Water Design, the only event in Italy which connects water and design, inviting us to reflect on the theme of water but also on the value of the design. Forme d’Acqua has collaborated with studio Antonio Citterio in Milan, creating a  fog system with 100 noozles in high pressure, able to translate into reality the visionary dream by Antonio Citterio and Patricia Viel.

A pool of water that alludes to fathomless depth reveals the cutout image of the 16th-century count. Nebulized water blurs the boundaries of the real space in a vaporous haze. The contrast between the clear reflection of the still surface and the off-focus background of the gaze reconstructs the dreamy state of halfwaking. Under the portico, the surreal fresco floats in the shadows.

We have fulfilled two wings with 50 noozles for mist scaping each, positioned at different heights from the ground and powered by two 6 l/min at 60 bar Premium pumps. An apparetly simple system, able to translate the concept of random in the 100 real points placed into the ground and to satisfy the expectations of Citterio Studio that entrusted the system design to our professional and creative ability. Huge was the feedback from the visitors who have been nonstop crossing the installation 10 days long, taking pictures and selfies. In order to play the fog effect up at night, 50 LED light spots by Reggiani Illuminazione. Spectacular indeed the fog effect on the move, while it crosses the beams of the IPNOS lanterns by Flos. A true magic.
Materiale