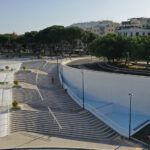 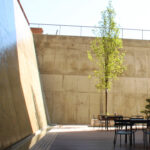 Water Wall – Giusti Dal Col Winery, Nervesa della Battaglia (TV)
Ground Fountains
Floor fountain – New Piazza Gina Borellini, Concordia sulla Secchia (MO)
A semi dynamic fountain for the reconstruction of the historic center destroyed by the earthquake.
0 Comments
0 Like!
Share
Description
It is May 29, 2012 when an earthquake severely hits Concordia sulla Secchia, leaving ashes and rubble along the streets. In recent years, there have been many interventions aimed at rebuilding the territory, among these the "Regeneration and revitalization of historic centres hit by the earthquake" program stands out, for which in 2015 the Municipality obtained a regional funding of € 1,250,000, part of the which is intended for the construction of the new piazza Gina Borellini, designated to rise at the intersection between via Garibaldi and via della Pace, to symbolize a new beginning without ever forgetting the past. The winner of the call launched by the Municipality for the design of the new square is the KM 429 Architettura studio in Viadana (MN). Arch. Alessio Bernardelli (project leader) has worked to recreate a new centrality, a hinge between past, present and future by transforming Viale Garibaldi, from street to square, the hub of new activities for a renewed sense of attractiveness. With regard to the project, the architect Alessio Bernardelli says:

“It is necessary to start from the square, a historical and symbolic place for the citizen, to implement the urban transformation of the country. A new place has been installed in the historic center, a symbol for starting over from tradition."

The winning construction company of the call is Merighi srl of Cento (FE), which has entrusted Forme d’Acqua Venice Fountains for the MEP design (mechanical, electrical and plumbing) and the creation of water features. The fountain is the focal point of the intervention: it extends over a rectangular area of ​​almost thirty square meters covered in flamed Luserna stone, where two parallel rows of five jets each contrast and interact with the surrounding architecture, creating a scenographic curtain of water. The skeleton of the fountain consists of ten custom-made AISI 316 steel boxes, recessed flush with the floor and connected to each other: eight measure 250x250xh300mm and contain the Oase Komet 5-8 nozzle and the spot LED, while the two central ones - with measures 500x500x500mm - they have larger dimensions to also accommodate the two OASE Varionaut 150 24V / DMX / 02 pumps, with which, thanks also to the OASE WECS II 512 / DMX / 02 controller, it is possible to create and program water and light choreographies . Given the presence of only two pumps, each communicates with five aligned boxes, offering games, heights and colors that develop the same along the succession, in this way the two rows communicate with each other in a counterpoint that generates joy and freshness. For water recirculation and filtration a Sena 0.5 HP pump by Astrapool by Fluidra is installed, in which there is an Aster D.350 5MC / H grit filter, essential to retain dirt and debris, while a control unit with double 5l / h 7 Bar pump constantly detects the Ph and Rx levels and manages the automatic dosage of liquid acid and chlorine, replenishing them as needed and thus guaranteeing always clear and crystalline water. The lighting is entrusted to ten OASE Profilux S RGB-W / DMX / 02 LED spots connected to three underwater LED Driver Compact / DMX / 02 to emphasize the movements of the fountain in the evening and give a touch of color that is always new to the building embraces the new square. At the base of the fountain a large corten plaque shows one of the most famous phrases of Gina Borellini, partisan and Italian politician, gold medal for military valor and a prominent figure in the local Concordia and national political life and in the struggles for the affirmation of equal rights between women and men after the war:

"I would like to tell young people that the thing to avoid is the use of weapons, and that they aim their youth on a democratic commitment to peace against war."

The floor fountain is the most requested type in recent years, regardless of the client, because both companies and public administrations are increasingly included in new or redevelopment projects, where the aim is to enhance the context by marrying it with full usability of the place. Here the floor fountains become a scenario dedicated to meeting places, due to the strong attraction they exert on people, but also for their versatility, which allows, if switched off, to free the area disappearing completely and allowing you to use the area for events, set-ups or demonstrations that require free spaces to be fully used. In addition, having all the electrical and mechanical parts housed in dedicated compartments and there are perimeter drains in the boxes useful for the water to flow out, these fountains are particularly safe and recommended for very busy environments.